A photo of an egg is the most-liked post on Instagram, beating record held by Kylie Jenner 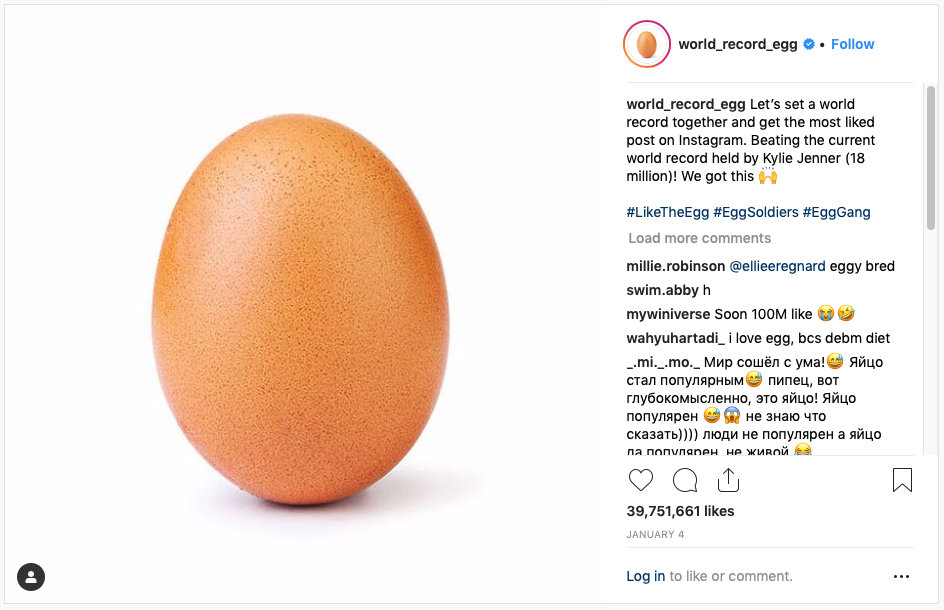 Nearly a year ago, Kylie Jenner received one of life’s greatest gifts — the birth of her daughter — and along with it, the distinction of having the most-liked photo ever on Instagram. Jenner’s post announcing the birth of baby Stormi received over 18 million “likes,” last February. But that record has now been eclipsed. A simple photo of an egg, posted by @world_record_egg on Jan. 4, has now amassed nearly 30 million likes on Instagram, leaving Jenner’s record in the dust.

What’s so special about this egg? Nothing, really. It’s all about the purpose of the post. The egg photo was posted with one goal in mind: to beat out Jenner as the most-liked Instagram post ever. “Let’s set a world record together and get the most liked post on Instagram. Beating the current world record held by Kylie Jenner (18 million)! We got this,” “World Record Egg” captioned the photo of a simple brown, freckled whole egg.

Not only did the random egg post beat Jenner’s record, but her most-liked post is now filled with comments of egg emojis. The “World Record Egg’s” attempt to troll Jenner — and the rest of the internet — was a success.

Jenner responded to being dethroned by seemingly murdering the anonymous egg’s cousin. She posted a resurfaced video of herself cracking an egg on pavement to prove how hot it was outside. “Alright guys. First let’s feel the ground,” Jenner says in the video, which was once posted on her Snapchat. She tells the viewers at home the ground is “really hot,” then proceeds to crack an egg on the street, which met with a friend’s laughter. The egg did not sizzle in the heat.

“Take that little egg,” Jenner wrote in the caption to her response to the “World Record Egg.” Jenner has 123 million Instagram followers and the egg only has 2.9 million. Considering one is a reality star and the other is an inanimate object, that is pretty impressive for the little egg.

Who created the egg account and posted the now-famous egg photo? Perhaps they’ll come forward to claim victory, or perhaps the world may never know. Over 27 million people “liked” an inexplicable photo, posted by someone they don’t know — this is just how the internet works in 2019.