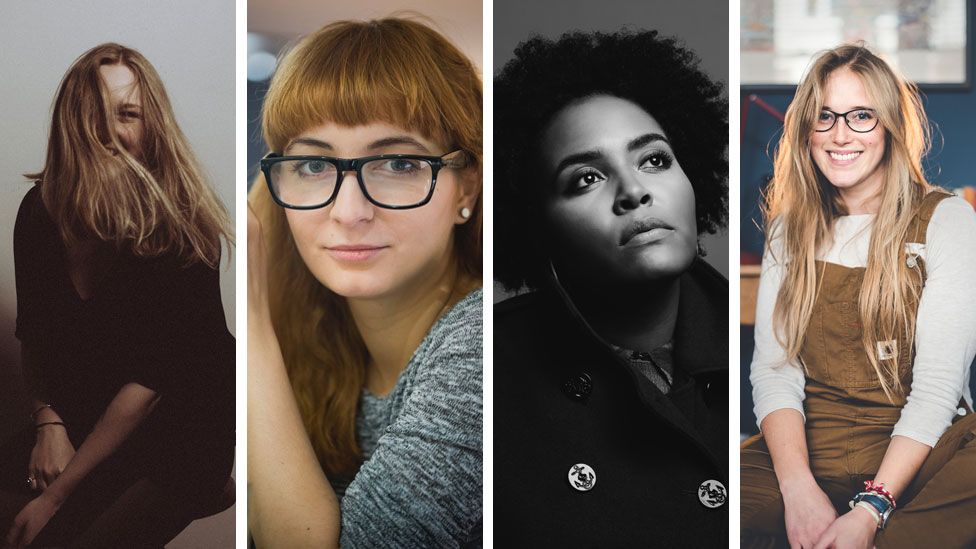 Photographers Jennifer McCord, Iulia David, Holly-Marie Cato and Amy Shore are leading the charge to get more women behind the lens. They will be passing on their knowledge at the Women Who Photo event to be held at the Photography Show in Birmingham.

Here we showcase a selection of their work and learn what inspires them.

Jennifer McCord can often be found in the pit in front of the stage, capturing a gig with her camera or documenting a band on tour.

Now 23, her career began when as a teenager she had a chance to shoot pictures at a concert around the time of the London Olympics, while volunteering with a charity that gives cameras to young people to help develop social and teambuilding skills.

After that is was back to school – but the seed had been sown.

With what she calls “naive arrogance”, she emailed a band who followed her on Twitter, asking if they wanted a tour photographer.

To her surprise, they said yes and a 10-day tour followed.

Those pictures are long forgotten – but the realisation aspiring photographers needed to keep “hustling” stuck.

“I was shooting four shows a week, unpaid for a year, emailing the photos to the bands and word got round,” McCord says.

McCord says social media is helping women break through into the industry,

“When I started, I wasn’t aware of women music photographers – but in the last five years that has changed so much,” she says.

“I was in a pit the other day and there was one guy and nine girls.

“I though this is it, we are taking over.”

But despite this, McCord says as you move up the ladder in the music industry, the top end is still dominated by men.

“I think it is harder for women, especially in music, as there is no room for you to be mediocre at your job,” she says, “you have to be excellent otherwise you don’t stand out.”

McCord tells anyone trying to enter the profession to make sure they have a good support system, friend or family, someone to help you out when you have bad days.

“Even on days where you feel you are not getting anywhere, it will come, just keep moving forward,” she says.

The travel and community photographer

“I am not your average street photographer,” says 27-year-old Holly-Marie Cato.

“I am a black woman with an afro and a camera in my hand. That is such a conversation starter, especially now I am using a medium-format film camera, people are asking me about it as I approach them.”

Cato often returns to the same places over and over to build a rapport and to let word of mouth take her on a journey from one person to another, building a deep relationship with the communities she is documenting.

Yet it took a while for Cato to even call herself a photographer – and, indeed, a film-maker too.

It all began by chance, when she found herself at the 2011 Tottenham riots. As she owned a camera, bought for her studies in architecture at Leicester University, she had been asked by friends to take some pictures behind the scenes of a production at a theatre in Tottenham.

While outside, she saw people protesting peacefully and took a few pictures.

“I had no idea that it would turn into what became the Tottenham riots and then spread across London,” says Cato.

As the protest turned into a riot, she continued to document it.

“I ended up taking film footage too, ” she says.

“And as I was the only one doing that, it ended up on the BBC, on Panorama, and then the Guardian and other news outlets across Europe.

“That was the catalyst for me. It was surreal and scary but this just shifted something inside me.”

Cato returned to her studies at university, however, not really thinking of photography as a full-time career and fully expecting to end up looking at “AutoCAD [computer-aided design software] for 10 hours a day”.

But she did pick up her camera again and, although she had to deal with “imposter syndrome”, she learned on the job and now works for a wide range of clients.

Now, she tells others of her experience as a way to give confidence to those wanting to break into photography or film-making.

“We see one idea of the travel or industry photographer,” Cato says.

“I want to highlight that there are far more women in the industry who have a voice and [are] doing amazing work and to attract a more diverse set of people.”

Amy Shore, 27, loves cars and motorbikes, but not purely as objects. For her, it’s about the adventures you can experience behind the wheel and the people you meet on those journeys.

Shore’s philosophy is that you should marry your passion with photography, whether that is cooking, astronomy, fashion, or whatever – it is the merger of the two that matters.

And cars are in her blood – her father has worked in classic-car restoration for many years as well as being part of the Lotus Formula 1 team in the late 1980s early 90s.

While at university, Shore photographed weddings in her free time – but it was a visit to the Goodwood Revival festival and a chance to take pictures of a replica Ferrari P4 that kick-started her career behind the lens.

The pictures of the Ferrari were shared many times on social media and picked up by a number of outlets, including Top Gear magazine and Playboy’s Facebook page.

“I’d never photographed a car before,” says Shore. “The night before I searched ‘How to photograph a car’. I didn’t have any fancy flashes and wasn’t that good on Photoshop but thought I’d give it a go.”

And from then on, Shore just said yes to all the opportunities that came her way, applying her knowledge of taking pictures of people at weddings to cars.

“My pictures have been described as vintage-looking, or romantic,” she says.

“Car photography can be very technical and masculine and I suppose it resulted in a sort of softer feminine style of automotive journalism.”

Of course, Shore is aware most of those interested in the automotive world are male, borne out by the fact that nearly 90% of her followers on social media are men.

Her influences are all conflict photographers, who don’t have a chance to setup or reset.

She thinks quickly and keeps situations as raw and as real as possible, often setting out with just a planned route and simple shot list but then seeing what photo opportunities develop on the way.

“The other day I was driving a McLaren in Arizona. It was one of those pinch-yourself moments,” says Shore. “I hope I never take it for granted.”

Iulia David’s photography career began by taking portraits of friends, which she would then retouch on the computer. Soon, word got round and she was getting lots of requests for shoots – so she decided to take the plunge.

David opened a studio in London, despite everyone saying she was crazy to do so. Now, aged 30, she has opened a second studio, in Birmingham.

“I spend about two hours retouching each picture – and, even today, find it very relaxing and therapeutic,'” says David.

“I love the photography of course – but I like my little space in front of the computer.

“Many people come to me for my clean and skinned look.

“I think people want to get away from over-processed images, so they look like themselves.”

David also runs workshops, with clients coming from far and wide. And the plan for the new studio in Birmingham is to make it a space where people can come and learn about photography.

“I don’t think there is a secret. You don’t need expensive kit. You can do it with basic things and still get good results,” says David.

“You need to be determined and confident in your skills. The beauty industry is hard to get into but not impossible.”

McCord, Cato, Shore and David are all taking part in the Women Who Photo panel discussion at the Photography Show on Saturday 16 March at the Photo Live Stage.