Translator Salaries by Language: The Top 10 Highest-Paying Languages for Translators (and Where You Should Live if You Want to be One) 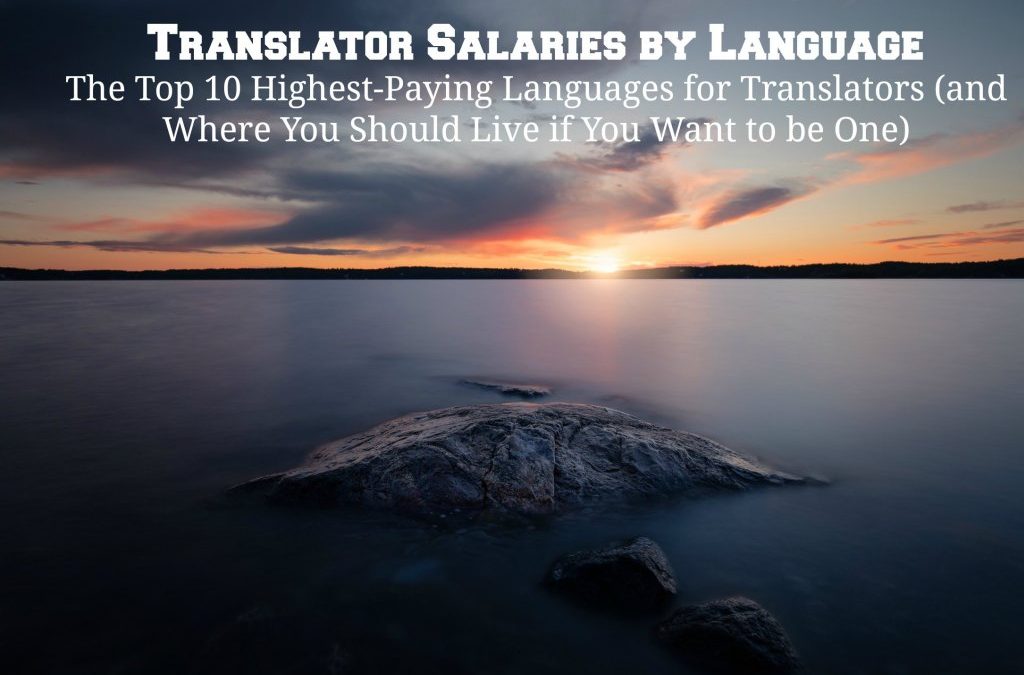 You probably have one of two motivations for becoming a translator:

Doing translation work fills the first need; becoming a successful professional translator fulfills the second. Of course, first you have to decide if becoming a translator is worth it.

Maximizing your potential for making money as a translator or language professional.

One of the most important factors determining how much money you make is your decision about which language(s) you should learn and translate to/from.

Let me be honest here.

In general, your language combination will affect how much you earn.

If you choose a poor language combination, you won’t be making as much as you could had you chosen a better language pair.

Before getting into specific languages, though, let’s look at the general job prospects for translators in the United States as a whole.

According to the Bureau of Labor Statistics Occupational Outlook Handbook, 2014-2015 Edition, over 60,000 people in the U.S. were employed as translators or interpreters in the 2012.

According to the report, this number is currently set to grow 46% by 2020, when the projected employment for translators and interpreters will get to just under 93,000.

For that we can look at the Bureau of Labor Statistics Occupational Employment Statistics which was published in May 2014. These statistics provide a more complete breakdown of the translation and interpretation industry in the United States, complete with salary data.

First, look at the annual mean wage of translators and interpreters by state in May 2014:

In fact, this is most definitely not the case. Check out the graphic below:

The top 5 states with the highest employment of translators and interpreters are the following:

Out of the top 5 states in each category above, Virginia is the only state that has one of top 5 annual mean salaries as well as with one of the top employment numbers.

This is all fine and good to know, especially for in-house translators. In looking at the fine print of this data, we read the following:

It makes sense that if you’re an in-house translator, you will probably find higher employment numbers and higher mean wages in states that hire increased numbers of translators for both federal and state governments.

But what if you don’t want to be an in-house translator tied to a specific location and would rather work for yourself as a freelance translator?

Well, freelance translation, by its very nature, allows people to live where they want and then work globally. If that’s what you want, then, it shouldn’t matter where you live. You could live in a cabin in the woods of Montana or in the heart of New York City. If your clients are remote, they don’t care where you live, either.

If your marketing is good and you can approach clients and sell your services well, and don’t forget the three lies about becoming a translator, one of the most important factors that will affect how much you earn as a freelance translator is your language combination.

Not all language combinations are created equally.

Take a look at this awesome graph I drew up in 13 seconds:

Guess where you want to be as a translator?

Yep, one of the top two sections:

But first, let’s talk about the lower two sections.

Without demand for a given language combination, you are not going to make any money as a translator for those languages.

The Xhosa – Uyghur example previously mentioned would fit into the Low Demand + Low Competition category. Despite there being no competition, there is also no demand. You’re not going to get rich.

OK, so as a person thinking about learning a language and becoming a translator, you’re going to want to be in one of the top two quadrants, but preferably the top left one with high demand and low competition.

The question then becomes how to figure out which languages are going to be located in this quadrant.

Unfortunately, there isn’t that much data out there for you to figure out how to logically choose the best language for earning the most money.

Luckily, though, there are some metrics we can use to make some discoveries.

This is where oDesk comes in.

For those unaware, oDesk is a platform like eLance, where skill providers can bid on potential jobs posted by clients. While these types of websites aren’t ideal for translators (they stink, actually), they can provide some metrics in determining which languages are more in demand and which languages have more or less translators.

So here’s what I did. I took the top 9 most used languages (along with Swedish) on the Internet globally (Internet users by language), and then did a quick search to see how many jobs were needed for those languages.

Then I did a quick search to see how many translator providers there were for those languages.

Here were the results:

I then normalized the numbers so they would be weighted equally and plotted them on a graph, overlaid on the demand and competition graph from above.

Here were the results:

As you can see, Spanish and French top the list of the languages with the most competition but also the highest demand. At the other end of the spectrum, you have Korean and Swedish with lower demand but also with lower competition among translators. The sweet spot between all ten languages seems to be Chinese and Japanese.

Of course, it’s important to remember that these results come from a single data source and only include nine languages.

In addition, the data source is not one that is used by most successful translators. Most translators that are making good money as language professionals are either doing in-house translation work or are working with direct clients.

But this metric can be useful. If you interested in becoming a translator but aren’t quite sure which language to pick, looking at this graph could help you decide where you want to place your efforts.

Are you OK with more competition but more demand? Choose Spanish and French.

Don’t want to fight over translation jobs? Japanese or maybe even Korean might be better suited for you.

Another source to look at when it comes to figuring out which language combinations command the highest return is a survey by the American Translators Association that it conducted in 2008.

ATA sent out an email survey to 8,700 ATA members and nonmembers in 2007. There was an %11 response rate, with ATA receiving back 979 completed surveys.

The survey attempted to extract demographic and translation-related information from the participants. One piece of information is especially relevant to this discussion.

Here is the paragraph from the report:

Both Arabic and Chinese are on the high end of the pay spectrum while Romance languages Portuguese and Italian were on the low end.

The Importance of Specialization

OK, so we’ve talked about locations in the United States and corresponding translator pay rates. We’ve realized that location can be important, but is not as important as language combination.

However, there’s one more thing to consider when trying to decide which language pair to learn, and that would be your area of specialization.

While having a language combination in the upper quadrants is a must for any freelance translator trying to make significant money, another important thing you can do is choose an area of specialization that is in high demand.

And what are those specializations, you might ask? Well, going back to the ATA compensations survey, we read that out of the nearly 1,000 survey respondents:

Of course, it would be nice to have access to the raw data to do some additional queries. For example, do most Japanese/English translators work in a certain specialization? Drilling down to that level of granularity could give us even more information when choosing not only a language combination, but also an area to focus on.